As the previous article explained, I’ve come to believe that everything in the omniverse is created and nourished by life force that streams from the central source, in the form of life, love, and omniversal knowledge. 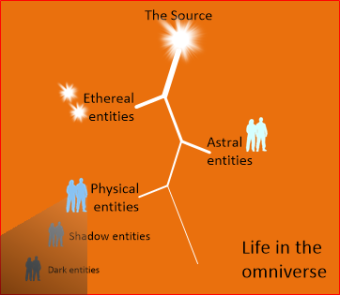 Life force streams from the central source, creating and sustaining every entity in every universe in the ethereal, astral, and physical realms, imbuing everything with life, love, and omniversal knowledge. When the life force reaches Earth, however, some is obstructed by savage motivations. Like sunlight bouncing off a building, some life force is deflected by the Earth and a shadow is cast. That shadow becomes the dark, hellish realms surrounding the Earth. Very little life force leaks into the shadows, hence the confusion, malfeasance, and suffering in those realms. (The shadow in the diagram might be unique to Earth; species on other inhabited physical planets might not have taken the savage turn that ours did.)

When the life force reaches Earth, most of it gets through to nourish life here, but much of it is obstructed by the savage, dog-eat-dog nature that has evolved in our world… and that obstruction casts a shadow around the planet. The savage thoughts and feelings that spin off the Earth have nowhere else to go but into those dark, shadowy realms that are sometimes called “hell.”

As a result, life on Earth is influenced both by vast, omnipotent, noble forces flourishing throughout the omniverse, and by weak but pervasive, savage forces stirred up in the shadows.

In other words, during a lifetime on Earth we’re subject to many perplexing spiritual influences that can affect our thoughts, words, and actions, as well as our afterlife prospects.

For whatever reasons, some people during a lifetime seem to be more open to noble influences of the life force, and others seem to be more susceptible to savage influences from the shadows. Other than testosterone and other hormones, I’m not exactly sure what all of those reasons are, but I suspect they’re as complex as the “karmic” factors that are involved in reincarnation, such as reparation, compensation, variation, and reputation.

In any case, I’m fairly certain of one thing: All people have the opportunity during their lifetimes to foster and to strengthen their connection to the life force as it streams from the source, thereby enhancing their lives and diminishing the savage influences that boil out from the shadows. And that’s what this article is about—what we can do during a lifetime to be a clear channel for the wonderful life force that streams perpetually from the central source.

Of all the articles I’ve written so far in this series, this article has the most “room for growth,” since there’s so much diverse information on the subject written by bright minds. The items below are listed in the order of how confident I am (at the moment) of their importance. The article is being posted on both websites—macyafterlife and noblesavageworld. The version on noblesavageworld will always remain in its original form, while the version on macyafterlife will probably be polished up as I learn more (from further research, inspiration, and readers’ comments).

So for peace, happiness, and vitality during a lifetime, here are some ways to open ourselves up to the life force as it streams from the central source:

And here are some additional items to consider:

This is not a complete list of ways to open ourselves up to the life force, but I think it’s a good start.

(As I mentioned, the version of this article that’s posted on the noblesavageworld website will remain unchanged, while the version posted on macyafterlife will probably be expanded and polished in the coming months and years.)