Editor’s note: My wife Regina—an energy healer, a volunteer and a retired counselor—gave me the notes below that I turned into bullet points. I got her permission to do some follow-up research and expand it into an article for this website. It’s on aspects of mental health treatment and recovery from addiction that can lead to happiness and well-being. Note that all of the practitioners’ names are also links to articles about their work.

Basically, there are three main approaches nowadays to treating addiction and mental and emotional ailments:

Psychiatrists in the US are medical doctors, so their treatment of patients is broadened by the wonders of modern medical technologies and at the same time limited by the constraints of the medical establishment.

On one hand, they can treat patients using mental and physical exams, CAT scans and MRIs and PET scans, blood tests, psychotherapeutic sessions, and pharmaceutical drugs.

On the other hand, they are discouraged from taking a comprehensive approach to a patient’s well-being… as many doctors admit:

Long story short, most psychiatrists today here in the States have been squeezed by the medical industry into a neat little box of prescribing drugs, and doing little else.

So, many professionals are looking outside the box. Some are finding, for example, that their medications work better when supplemented with spiritual practices.

While spirituality and religion often get tossed into the same bowl, most of us familiar with this website make a distinction: 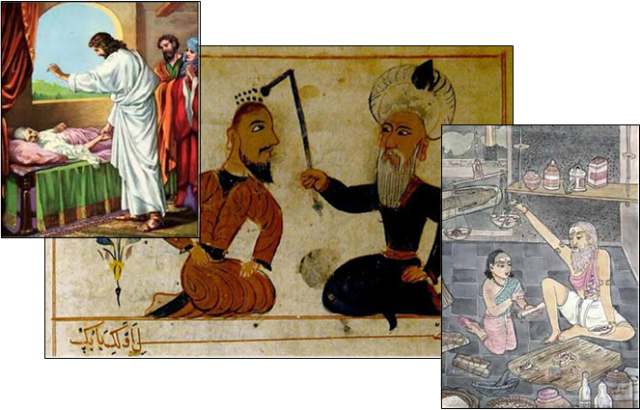 The fringe element includes many Christian Scientists, along with some evangelists, saints, monks, gurus, and others who accept God as the ultimate reality and the ultimate source of power, and who make a concerted effort to detach from some (if not most) aspects of the material world.

But if you move back from the fringes of science and religion, there’s a noticeable migration toward common ground.

After all, it’s fair to say that religions have as much mental illness, and probably as much addiction and alcoholism, as any other segment of society… and most people who are immersed in religious and spiritual living are open to medical treatment when the need arises.

Therapy provides a bridge between psychiatry and spirituality, and does a great deal more. Psychiatrists usually share their patients with psychologists, counselors, social workers, members of the clergy, and other types of psychotherapists.

The purpose of therapy is to remove mental blocks by helping patients face any faulty reasoning that has taken root in their lives and by helping them understand the causes and effects of the flaws.

Causes can include hormonal, environmental, family-related, and spiritual influences.

In recent years, lots of young people studying to become therapists are writing theses on the value of religious and spiritual beliefs in the practice of medicine.

Main interests are other-worldly matters (www.macyafterlife.com) and worldly matters (www.noblesavageworld.com)
View all posts by Mark Macy →
This entry was posted in Uncategorized and tagged overcoming addiction, therapy vs psychiatry vs spiritual healing. Bookmark the permalink.

3 Responses to Finding Peace from Addiction and Suffering: 3 Popular Paths