(Politics and the Human Spirit – Installment 13)

You may have noticed that here in the USA there have been no wars between the states since 1865, when the Civil War came to an end and locked us firmly into a Union. There’s still plenty of bickering among states… and grumpy little groups threaten to secede from time to time… (dissatisfaction is part of the noble-savage character) but we no longer go to war over states’ rights. A strong federal government provides a reasonably stable umbrella of apprehensive peace among us Americans.

A lasting peace of this kind—semi-stable, semi-strained—is about the best we can ever hope to achieve as carnal humans here on Earth… given our egos, our hormones, and our fight-or-flight neurochemistries.

Our steadfast soul shines brightly at the center of our being, working nonstop… anchoring us solidly in love and good will. But our physical body is hard-wired for fear, suspicion, and conflict… and yanks endlessly at the anchor chain like an angry dog.

Because of the noble-savage battle raging endlessly inside us, a “shocks-n-springs” sort of peace is about the best that any “peaceful” nation can hope to sustain. 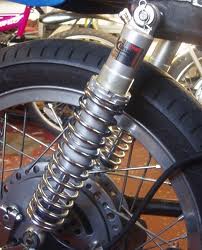 Our noble-savage human nature is like the shocks-and-springs assemblies on modern cars and motorcycles. The springs let the vehicle bounce over rough roads without getting jostled to pieces, while the shock absorbers keep the vehicle from springing out of control. Our savage concoctions of hormones and fists and weapons help us survive the rough rides of Planet Earth (like springs), and our noble side—the finer spirit within—keeps us from churning out of control (like shock absorbers).

That same sort of “shocks-n-springs” peace that sustains itself in peaceful modern nations… will not prevail worldwide… among all nations and races and religions and multinational corporations… until humanity has forged a union of mankind under the umbrella of a strong world government… probably an empowered United Nations.

Once Planet Earth has an umbrella of a stable world government… only then will humanity achieve any measure of world peace. Only then will wars among nations become a thing of the past.

This Politics and the Human Spirit series has explored a few of the things we can do in the short term to make the world a safer, happier place:

The Most Critical Situation Today

I’d like to add one item to the list… a critical situation that could darken the fate of the United States in the near future… which could then shift the world onto a more savage course.

There’s a small but powerful, wealthy, and egocentric contingent here in the States associated with the Koch brothers, Karl Rove, and Fox News… who seem to want  political power at any cost. The groups involved seem to be motivated largely by fear, mistrust, misinformation, and xenophobia… obsessing over a strong military, gun ownership, immigration policy, and other paranoia-related issues.

To manifest their savage agenda, a network of fraud-prone, computerized voting machines has been put in place in several key states to flip national elections in favor of the conspirators. Those cheat-easy voting machines brought the Bush Administration into power, leading to the current upheaval in the Middle East. If they’re not disabled, they could usher America and the world much deeper into a dark and troubled era.

So… I’d add this bullet item to the list:

Those cheat-easy voting machines sitting ominously in Ohio, Virginia, Florida, and other key states… waiting to steal the next US presidential election… comprise (imho) the most critical and potentially destructive condition in the world today. If unstopped they will lead America and the world down a very dark, savage road this century… beginning as early as 2016.

One theme runs through this series of articles like a thread, pulling everything together… and that is the fact that we’re noble-savage creatures on a noble mission to spread peace, love, and good will on Earth… but our savage side keeps getting in the way.

That has to be the closing note for this series: To fulfill our mission, we have to foster our noble qualities and to tame our savage side… and we have to do it at all levels of human affairs.

Fostering nobility at the personal level can move us toward inner peace and happy relationships.

Fostering nobility at the planetary level can move us toward contented societies and world peace.

Separating the Noble from the Savage

“Noble,” as defined in my work, refers to the finer spiritual part of us that’s driven by love, trust, good will, and the desire to serve others selflessly.

“Savage” refers to carnal human qualities that help us survive in a rather savage world where life kills life to survive. Our worst savage qualities compel us to be fearful, suspicious, contemptuous, and aggressive.

We also have a lot of benign savage qualities that give us basic survival skills in a carnal world. Breathing, eating, procreating (sex), and healing from sickness and injury… these are all savage human qualities.

The best way to distinguish between the noble and the savage is to answer a simple question:

What qualities are present in the afterlife paradise worlds of light?

Those are noble human qualities: Love, trust, good will, desire to serve others selflessly…. Those qualities form our noble core as human beings.

Most of our other qualities were hard-wired into our carnal compositions long, long ago so that we could survive through hostile eras on Earth. List all of those qualities that help us survive the rigors of life on Earth, and you’ve got a snapshot of our savage side.

No Such Thing as a Noble War

There can’t be a “noble war” because conflict of any kind is savage… period. No exceptions. Even a debate or difference of opinion is savage.

Because of the savage qualities of life on Earth, war might sometimes be justifiable… even necessary… but it’s never noble.  War is always savage.

We need to stop romanticizing savage human behavior if it blurs the lines between noble and savage. Know savage behavior for what it is and accept it as part of our carnal make-up… but don’t think there’s anything noble or highly spiritual associated with it. There isn’t.

Basically, we have to do savage things to survive in a savage world… but the more we do that, the more difficulties we’ll have later on… as we try to get settled into a light afterlife paradise after we die and leave the Earth. If we attach ourselves too heavily to our savage qualities during our lifetime, our spirit will migrate to darker, more troubled realms after we die… where it will feel more “at home.”

With that in mind, every human life and every human institution should center itself around a strong core of noble values… and those values should be manifested in the world through noble behavior.

People should know about the savage qualities of the world and the savage compulsions within them, and that education should probably begin in adolescence, when hormones start to rage.

People should understand the savage side of our human nature and know what kind and degree of savage behavior is appropriate.

Everyone and every group should maximize noble choices and noble living in the course of a day or a lifetime… resorting to savage behavior only when necessary.

Politics and the Human Spirit series:

Best and worst countries to be born  –   Election fraud 2012  –   Best and worst US presidents  –  Humor in politics  –  Biggest political news –  End of the American dream  –  Blown to bits in the computer age  –  Standards, the key to peace  –   What Obama and Stalin really have in common   –  Bad counsel and a short leash   –   Capital punishment & the human spirit