Reading this stuff can be dreadful, but hey, it’s not the end of the world. 🙂 I’ll try to present it in a way that’s reasonable, maybe even hopeful if that’s possible.

Until I got involved in ITC back in the early 1990s, I never gave much thought to Armageddon or the Apocalypse—cataclysmic years of big wars, population explosion, environmental destruction, and natural disasters that might someday decimate humanity.  Then… 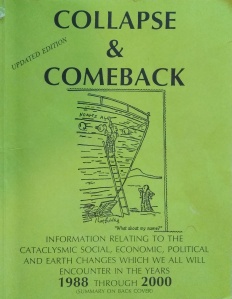 Since then I’ve been trying to figure out what’s really going on with the whole End Time scenario. I’ll try to explain it as clearly as I can in a moment, but first let’s glimpse some of the more popular eschatological visions, both old and new, to find common threads.

There are both worldly symptoms and other-worldly implications associated with the End Time idea. Religions generally look at both, while science and other secular studies concern themselves only with the worldly information (which, by itself, can be a little daunting).

Spiritual implications. All of the great, time-proven religions promise a reawakening or a rising-up of noble humanity after its savage fall. Examples include:

All of these worldly End Time scenarios have a similar theme: The savage aspect of humanity causes ever greater destruction on Earth until it all falls apart.

Then spiritual scenarios take over: Other-worldly forces intervene to clean up the savage mess and to restore humanity’s noble bearing.

End Time in a Nutshell 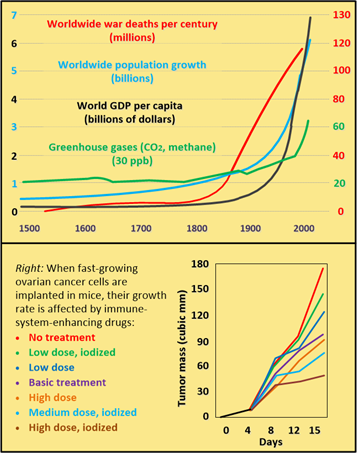 Over the past two centuries, degrading conditions that distress the Earth are like fast-growing cancer cells that are killing the body. The only effective treatment for planetary malaise (as far as I can see) would be a world authority that regulates population, environmental integrity, and military activity… but that’s not likely to happen anytime soon. So world crises seem to be coming to a head. Sources for the top chart: World History For Us All (UCLA), the EPA… and the National Review. Source for the lower chart: Gregory Chi-Yu Lee, via Researchgate.

Planet Earth today is like someone in the late stages of cancer.

Those, again, are all worldly signs of “the end.”

Then spiritual factors step in to assure us that the end is really just the beginning… or that it’s all just part of an endless cycle.

Here’s what we learned about the End Time through ITC contacts (reliable, high-tech communications with the other side through a stable portal).

The Seven Ethereals told our INIT group in 1996, through a computer at our main European station in Luxembourg:

We have often given you the real purpose of ITC contacts: Mankind at the End Time should be led back to the principle. Light and darkness shall unite and form a whole again. What people experience now is not the actual beginning of the apocalypse, but only the first symptoms. 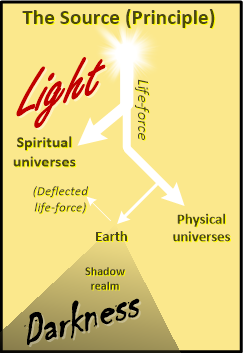 The principle, or source, emits light (life-force) that creates and nourishes all life throughout the omniverse. Everything that receives the light feels it as an all-embracing love. When it reaches Earth, however, some of the light is deflected by the brutal nature of the planet, where living things kill and eat each other to supplement their life-force… a process that has come to fill the world with fear, suffering, indignation, and grief. The result is like sunlight deflected off a building. It casts a sort of shadow, creating a dark spirit realm of troubled thoughts and motivations that envelops our world like an invisible storm cloud.

So the first thing we need to do is to understand what they mean by “the principle” and by “light and darkness.”

So when our ethereal friends say, “Light and darkness shall unite and form a whole again,” I believe they mean that once the Earth “hits bottom” and reaches its worst period of suffering, the dark, shadowy spiritual residue around our world will somehow be pulled into the light of the omniverse to be cleansed and maybe polished away like tarnish from silver. At the same time, intense, healing light and love will be streamed to Earth from the finer realms of spirit.

It makes no difference what religion you belong to. What matters is the victory of reason and understanding over materialism and irrationality at the End Time.

Hopefully, articles like this one can provide a small step toward “reason and understanding” of what we all face today in terms of endings, new beginnings, and the cyclic, timeless nature of life.

(Issue 9603 also has an article on page 10 about how humans can reconcile the fact that we have to kill and eat other living things during a lifetime. It includes the passage, “Keep on eating the meat and vegetables you need to subsist, but be grateful for what you eat. Prayers at the table spoken from the heart will help you not to feel like you have blood on your hands.”)