Worlds Within Worlds 20 — Good and Evil in a Nutshell

(Note: I’m a couple of months overdue with an article because I’ve been busy on a project that (I hope) will test the waters of ITC publicity this year… which can be a sticky wicket, as explained at the end of the previous article last November. That publicity project has given me a clearer sense of how the notion of good and evil crept its way into human affairs long, long ago. I promised the other folks on the project that I wouldn’t divulge too much about what we’re working on until the project is complete this spring, but I think this article is okay, since it simply refines some concepts I’ve already written about on this site. — MM)

This is a picture of the entire omniverse—the “all that is.”

The source is the entity (or principle, or force, or perfect state of consciousness) that religions call God, Allah, Brahman, Tao, nirvana, and other names. It emits a life-energy that creates and sustains everything in many parallel universes with vitality, love, truth, understanding, and other noble virtues. Everything in the omniverse is nourished first and foremost with that life-energy, which streams outward from the source as pure, non-vibrating light. Then it vibrates more and more slowly as it moves outward, or “out-beyond,” to create and nourish countless parallel universes.

As the picture suggests, everything in the omniverse has copies of itself in finer realms closer to the source. That includes you and Planet Earth.

When our physical body dies, our spiritual bodies live on. When anything in the physical universes ceases to exist, its spiritual copies or templates continue to exist.

That’s all a bit mind-boggling, so for an easier understanding of the big picture from an earthly point of view, the omniverse can be arbitrarily divided up into three realms and seven levels: 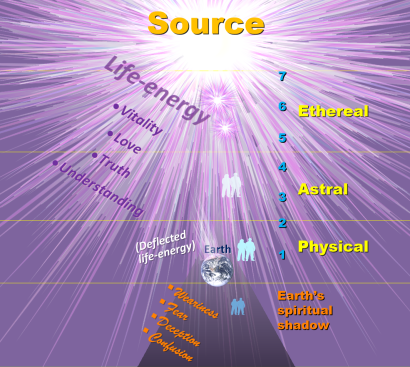 Things are most powerful and real closest to the source, and they become weakest and most illusory out in the fringes of the physical universes.

That, in a nutshell, is the big picture of everything.

Now, the dichotomy of good and evil.

Something odd (actually, something rather grotesque) happened on Earth tens of thousands of years ago, when living things started to steal life-energy from each other… by feeding off each other… often by killing each other in the process.

As a result of that parasitic, predatory way of life, the Earth has been blocking or deflecting some of the life-energy that flows freely from the source, casting a sort of spiritual shadow around our planet. The weariness, fear, deception, confusion, and other savage feelings that are stirred up by predatory living have no place in the omniverse, so they remain stuck around our world, creating a dark, invisible cloud or shadow of spiritual residue.

Choosing the Source or the Shadow

Being born on Earth, we all have both the noble and the savage inclinations within us, shaping our thoughts, words, and actions. The choices we make in the course of a lifetime determine whether we align more closely with the source and its light, or with the shadow and its darkness… whether we’re primarily vital, loving, truthful, and understanding in our dealings with others, or whether we’re mostly predatory, feeding off others and adding to the weariness, fear, deception and confusion in the shadows.

Once again, to be alive on Earth is to have both inclinations… but we can each choose which way to lean.

The basic rule of thumb, as explained by most religions, is simply this:

In other words, both our disposition in this lifetime and our afterlife experience are determined mainly by how effectively we’ve been able to tap into the source, to accept the life-energy flowing throughout the omniverse… for example, through meditation, prayer, and self-reflection… by monitoring our own behavior to ensure that we think, speak, and behave in ways that are compatible with the vitality, love, truth, and understanding of the omniverse.

How effectively we can do that determines whether we awaken after a lifetime in the paradise worlds of level 3, or in Earth’s spiritual shadow, or in some other “place” in the omniverse. We are drawn to the “place” in which we are mentally, emotionally, and spiritually compatible.

That said, we can relax. Most of us will awaken at level 3, as explained elsewhere on this site… for example, here.