When we founded the INIT association in 1995, we got spirit communications and apports (materialized objects) that seemed miraculous to me at the time. What made those “phenomena” possible, I believe, are portals that sometimes open up to our world from lighter realms.

The term portal is related to contact field and ITC bridge, but is broader in scope.

What Is a Portal? 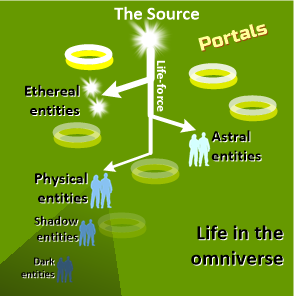 As I understand it, a portal between two dimensions is a channel for the flow of “living information” (that is, the essence of the life-force). Portals are opened when collaboration is desired between two dimensions for a particular project. One end of a portal is closer to the source (lighter), and the other end is further from the source (darker). As a rule, the information at the lighter end of a portal is purer and more reliable. Portals closest to the source (in ethereal realms) are the most stable and durable, while portals furthest from the source (near the physical realms) are the most erratic and fragile. A portal is made stable and durable mainly by resonance or harmony among minds involved in a project from both sides.

Apparently a portal is created when interdimensional collaboration is required for a particular project, such as an ITC bridge. It requires a field of resonant life-force among minds of living entities on both sides of the portal. Once the resonant field is established among the minds of compatible entities on both sides, a portal can open up, and information can flow in both directions.

It stands to reason that:

Portals on Earth are difficult

If those three principles are true (as I believe they are), then:

Portals involving Earth are unstable because of the savage aspects of the planet… what our spirit friends have called a prickly or dissonant “vibrational fabric” of our world. That, I believe, is why the exceptional portals in the 1990s associated with INIT (and probably with the Scole group as well) failed after just a few years.

When a portal is successfully created and sustained between Earth and finer realms, the “information” arriving in our world might be delivered:

The scope and magnitude of the information delivered (whether a coin or a great pyramid) is probably determined by the strength and purity of the life-force in the minds of entities at both ends of the portal.

2,000,000,000 years ago the invincible Edenites, who had long been marooned on Earth, apparently possessed the mental strength to transduce life-force through portals in a way that could create and sustain the entire living ecosystem in our world.

2,000,000 years ago their descendants, the mighty Titans, had the mental strength to create megalithic architecture (again, apparently with life-force through portals).

Today, as dissension and discord have become an intractable part of our short lifespans on Earth, it’s hard to sustain a stable portal between Earth and the spirit worlds… but significant portals do open up on various occasions under the right conditions.

One significant, high-tech communication portal opened up on Earth in the closing years of the 20th Century, allowing spirits and ethereal beings to give us world-changing information. They called us on the phone, chatted through radios, sent pictures through our TVs, and delivered long letters through our computers and FAX machines. These spirit communications reached an apex with the formation of INIT (the International Network for Instrumental Transcommunication) in 1995.

The finer spirits associated with INIT were trying to give us (humanity) some key puzzle pieces about our ancient heritage, our spiritual roots, and the prerequisites for interdimensional collaboration. They certainly got our (INIT’s) attention.

This is how (and why) I think the INIT portal opened up:

[Seeds for the INIT portal had already been planted long ago, at the end of the First Epoch (Atlantis) during a mysterious meeting of priests in the Sothis Temple along the banks of the Euphrates River, where Babylon would emerge some 10,000 years later to start the Second Epoch. (Read that fantastic story… )]

“In the course of bygone decades, of thousands of earthly years, beings interested in human species meet to decide on the continuation of The Project.” — One of The Seven speaking in 1996 through the telephone answering device of Maggy Fischbach (excerpt).

Maggy and Jules with one of the seven “guardian angels” who watched over and protected their work.

“We, the Seven of the Rainbow People, have decided to help and support the way chosen by you in INIT. It is the way of morals, which means to understand, to acknowledge, to devise, and to act.” — One of The Seven speaking in 1996 through the telephone answering device of Maggy Fischbach (excerpt).

Recipients of the Eleanor Roosevelt Award in 1994: Robert Muller (Asst Secretary-General of the UN), Juliet Hollister (founder of the Temple of Understanding), and the Dalai Lama, Tenzin Gyatso (Buddhist spiritual leader).

“This is the seventh time that we accompany and guide you on your progress towards a free, wealthy, and sane future in which humanity would have stripped off the chains of intolerance and cruelty, a future in which it will be able to establish fruitful and durable relationship with the light, ethereal realms of existence. You are in the right way. You are a small number, but much depends on you and on your decisions those days (referring to our upcoming INIT meeting in Tarrytown NY). We trust in you.” — One of The Seven speaking in 1996 through the telephone answering device of Maggy Fischbach (excerpt).

In the end, INIT did not succeed in establishing the seven stable portals among worldwide members all resonating with love, trust, and good-will. Nor did any of us “fall into the pit” of darkness and malice.

Instead, we all did the “human” thing: We went our separate ways to pursue ITC and spiritual growth as best we could within our innate, noble-savage limitations.

Even though INIT didn’t succeed in its complete mission, what we learned about portals could he useful to anyone hoping to establish the next stable ITC bridge here on Earth… and to try again. But it will require some patience, to see if ethereal beings are attracted to their work to facilitate and to protect the bridge.

It will also require the ability of us humans to collaborate “with one mind,” something that does not come easily to us.